Back again with more of my Iceland trip recap! If you missed the details of the first three days check it out here. Now on to more of our tour of the Ring Road!

Started off the day by doing some backtracking through Egilsstaðir. Stopped for gas and there was the cutest little bakery in the parking lot! Grabbed some coffee, a couple croissants, and some sort of delicious chocolate pastry that we split. I love European bakeries so I was pretty excited to come across that little gem. From there we made our way to Dettifoss. I absolutely loved walking the trail system here and we had the best conditions for viewing the waterfall, beautiful rainbows everywhere! 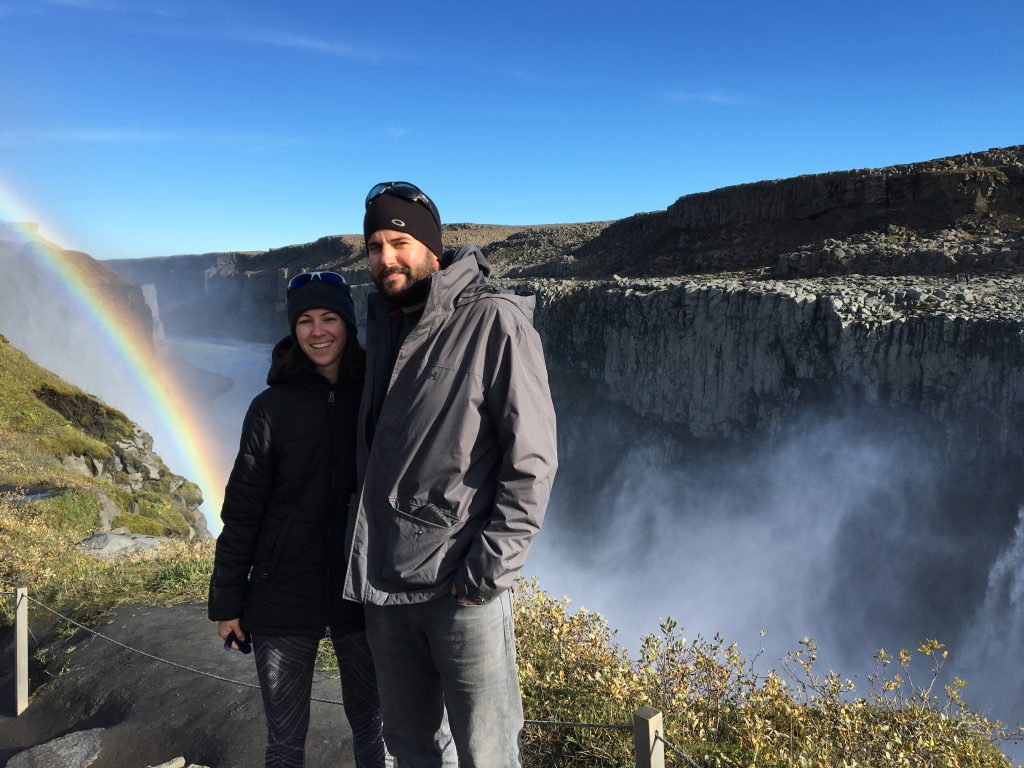 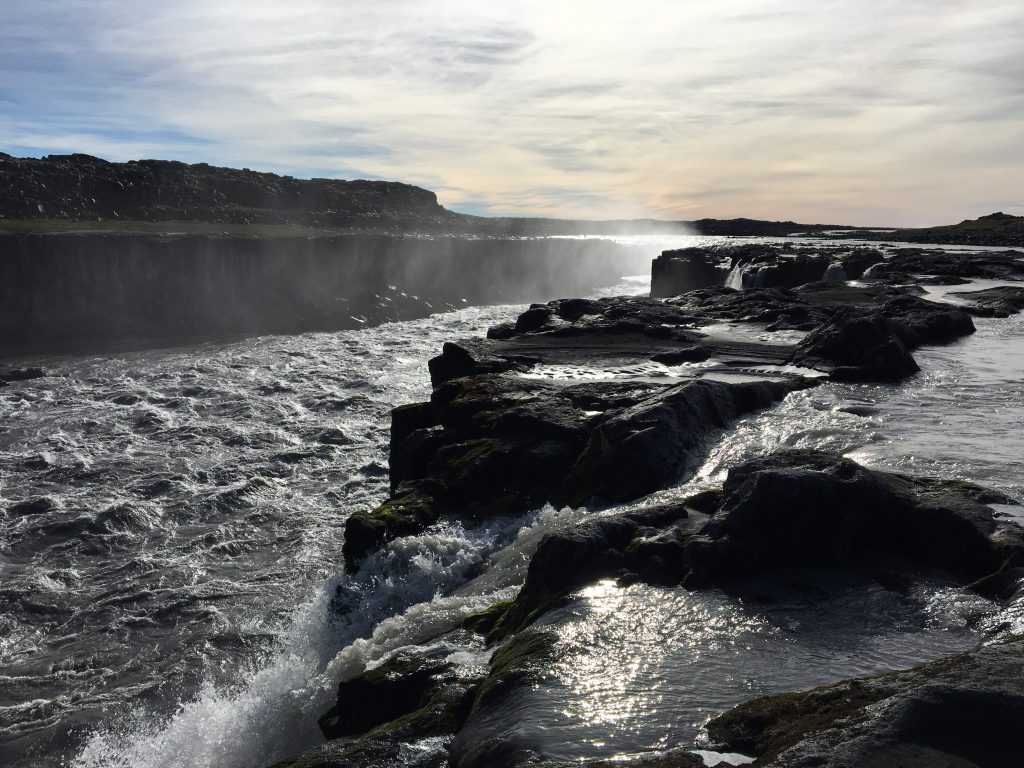 Smaller falls along the trail at Dettifoss

We left Dettifoss and started down the Diamond Circle headed fro Ásbyrgi Canyon. After a half hour we turned around, the road wasn’t great and we weren’t sure how long the whole thing would take. In hindsight, we definitely had time to do the circle and hike the canyon. On the to-do list if we ever go back!

Back on the Ring Road we headed for Mývatn. On the way we took a quick side detour to check out the Krafla volcano crater. There were a series trails around the area and several stops, however, we just checked out the volcano crater and then continued on our way (the smell around there wasn’t great, especially if you have a very sensitive sense of smell….which I do).

When we arrived in Mývatn we stopped at the Hverir geothermal field. The smell at the volcano crater was like roses compared to the geothermal field. There were a series of sulphurous mud springs, steam vents, cracked mud and fumaroles. It was really amazing to see, but the smell made the eyes water so after wandering around and getting pictures and videos to remember it by, we got out of there to get some fresh air.

Close by the geothermal field was the Mývatn Nature Baths. We knew we didn’t want to go in the pools, but we couldn’t pass by without at least stopping for a look. I couldn’t believe how beautiful they were!!!  It’s so amazing that they have so many natural baths in Iceland!

While at the nature baths we checked out our list of places we had wanted to see as well as tripadvisor. Josh wanted to check out an area down an F-road where we could hike, camp, and hang out in a hot spring so we back tracked a few kilometres to F-88. Had we checked out the sticker on the dash of our vehicle, we would have saved some time (turns out we weren’t actually ALLOWED on F-88 with the rental, one of only two roads in Iceland we couldn’t drive on). I’m glad we went down anyway because any back road travel meant nice views and cool experiences. We got just over an hour into the drive when we came across a water crossing that we were most definitely not getting across with our vehicle. We stopped and checked it out and chatted with another car load of people, who told us that the crossings farther on were supposed to be even worse than this one. In the end we all turned around and headed back to the Ring Road.

We were feeling a little defeated since the whole day had been a lot of backtracking and not really finding the things we had wanted to do (can’t complain about the scenery though so none of it was really wasted time!). We decided to salvage the day by heading to Goðafoss. The big waterfalls were our favourite part of the trip so far and we knew that this one was one of Iceland’s finest. Turns out this was a great choice, because Goðafoss turned out to be our favourite waterfall in Iceland. There was great access from both sides of the falls so we were able to view them from several different locations. 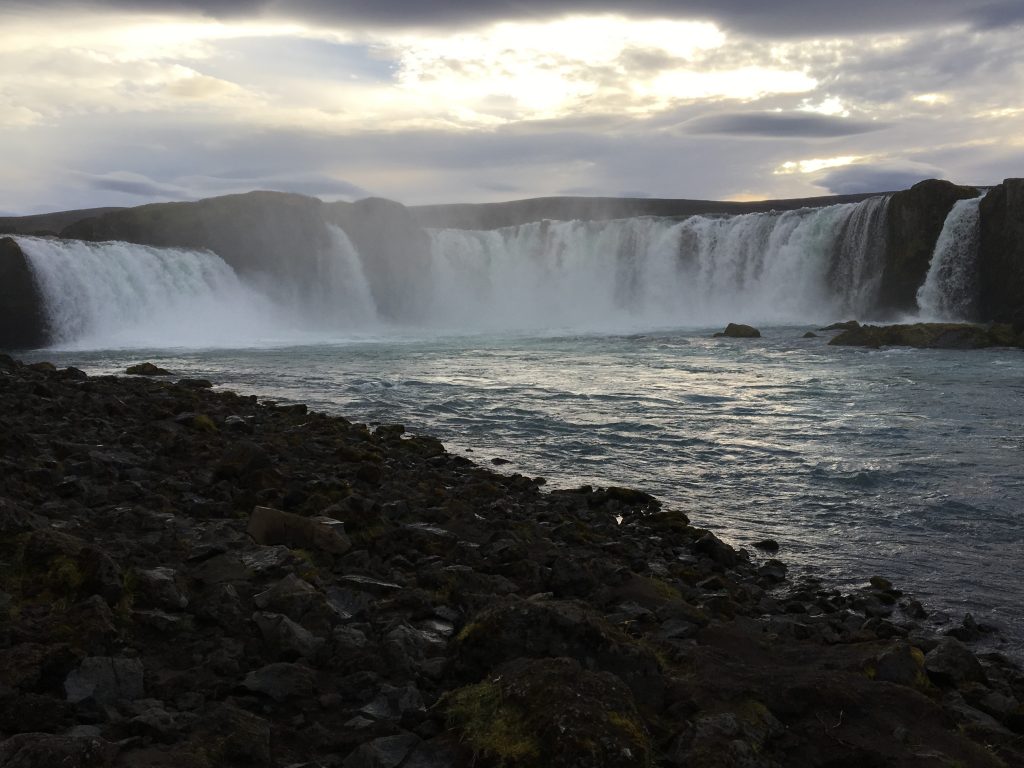 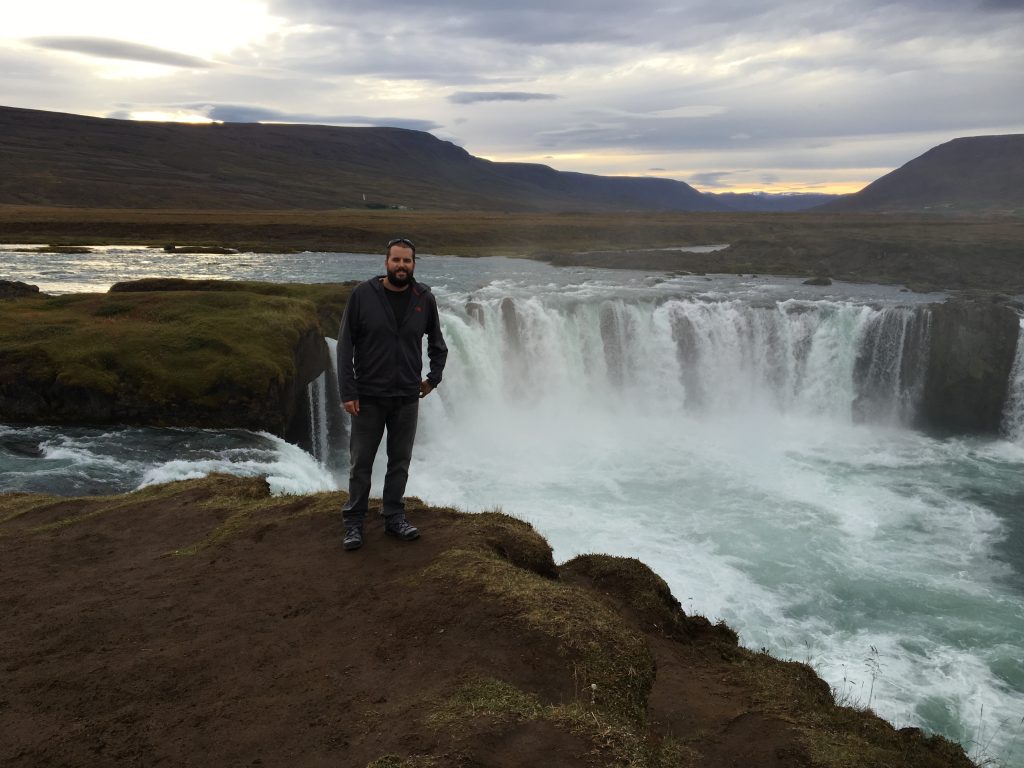 We left the falls and drove around Lake Mývatn (that drive was also a saving grace, it was beautiful) on our way to Akureyri. We were headed for a camp site that was highly rated and was surrounded by kjarnaskógur forest. Luckily, there weren’t many other campers there so it made the site ever better!

Since we were staying in Akureyri, we decided to stick around and explore since it’s Iceland’s second largest urban area. Of course the first thing I wanted to do was to track down the best bakery in town. We ended up at Kristjans Bakari and the reviews were right. Finally tried Icelandic pizza (we heard it was pretty great) and some sort of chocolate covered sweet bread. Random breakfast combination but it worked. 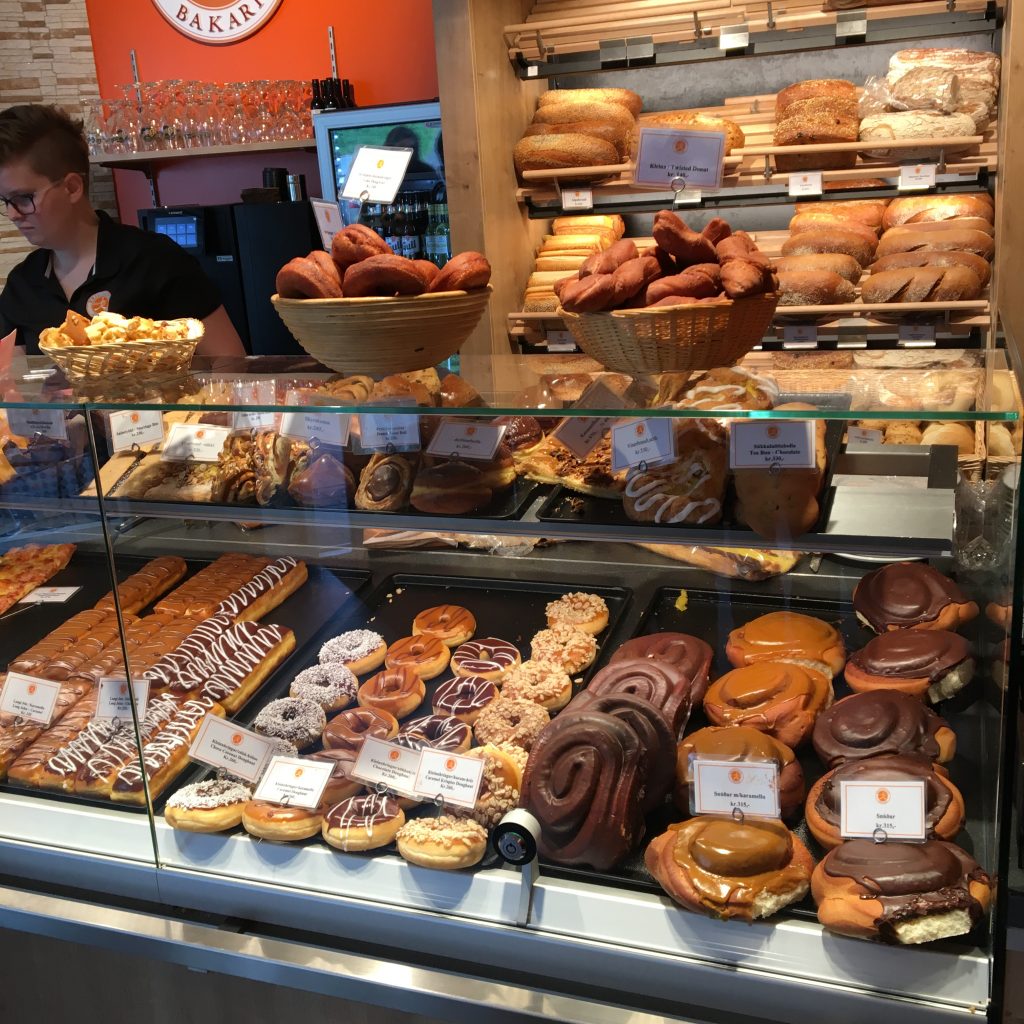 After we ate we wandered in and out of some shops on Hafnarstæti Street before we hopped back in the SUV and tracked down the botanical gardens. Josh was hesitant to go in because there were a lot of birds in the trees and he didn’t want to get pooped on….I assured him that was silly and we wouldn’t get bombed. Roughly 5 seconds after the words left my mouth, a bird pooped on my head. I played it off and we continued into the garden. It was a small outdoor series of gardens but very well kept and a worthwhile walk.

We did a search around town for the Einstök brewery but we didn’t find it (google maps wasn’t very good once we were in populated areas) so we took off out of town headed off the Ring Road for Siglufjörður. I was under the impression that there was a waterfall up there, turns out my eyes were just bad and what I was looking at on our printed out map was a church. We were so glad we ended up doing the coastal drive though because it had some spectacular views! Once we arrived in Siglufjörður we ended up eating lunch at Kaffi Rauðka. I figured if I was going to try fish while were in Iceland, that eating at a restaurant on a dock in a small fishing village was probably the way to go. I wasn’t wrong. The food and the service were both great. 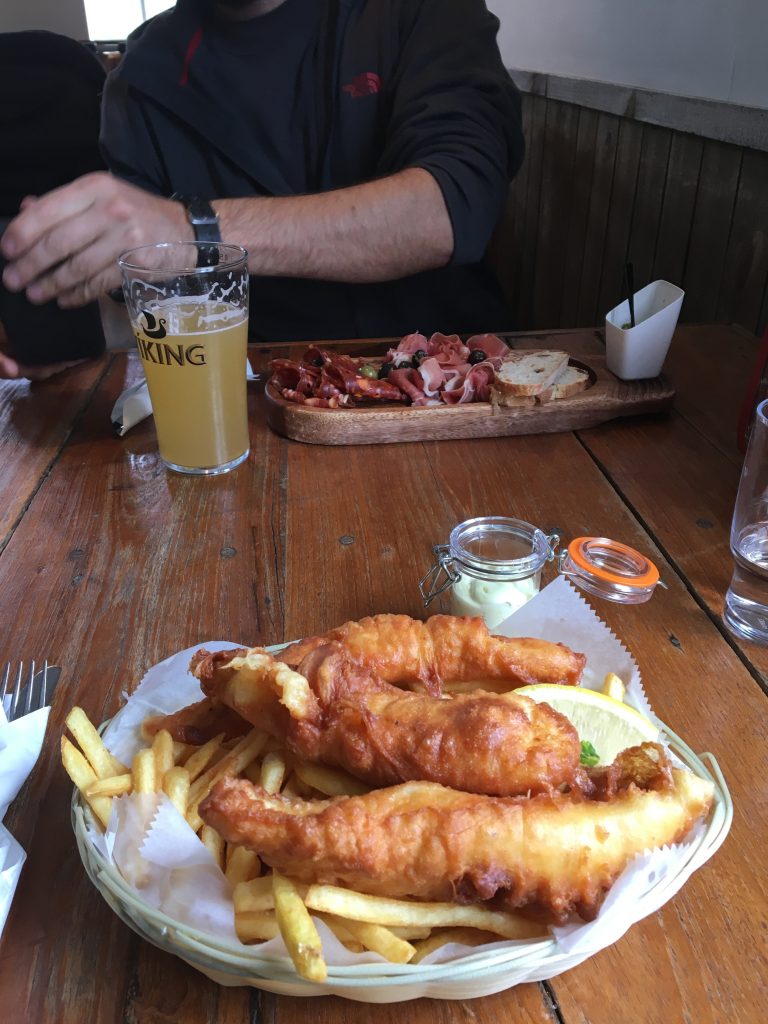 Our coastal detour drive took the rest of the afternoon since we stopped to take lots of pictures along the way and we tried to find a couple of different sites that didn’t work out (a geothermal pool that was closed, a private hot spring we couldn’t find). We decided to have our first early day and we headed to the camp site in Hvammstangi. We rolled in around 5:30 and did our routine set up. Next to where we parked there was a stream, the stream ran through a field that had a herd of horses. Not long after we arrived and were standing outside the SUV the whole herd ran through the stream and stuck around the area where we were. It was amazing to watch them and a great spot to relax for the evening. The camp site wasn’t as nice as some of the others we had been at, but it did the trick. 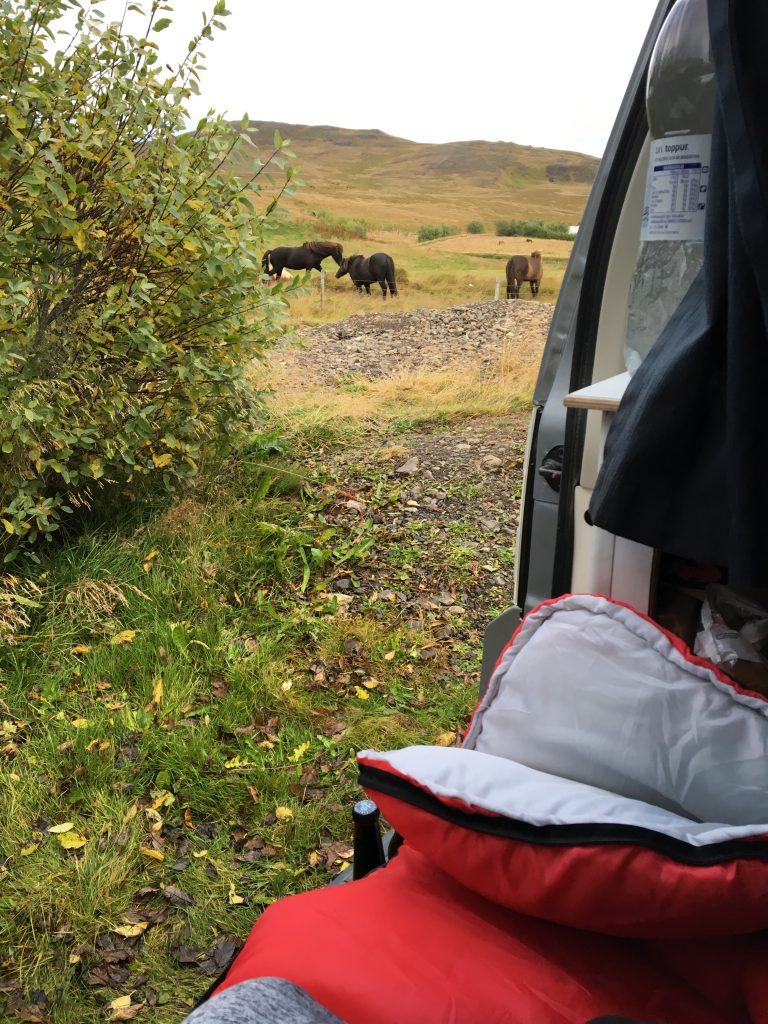 Hanging out in the back of the SUV watching the horses

Day 6 was a big one! It certainly made up for a couple days that involved a lot of driving. We started off the day at Kolugljúfur Gorge. It was pretty close to the camp site so we headed there with some coffee and snacks and had the place to ourselves! The gorge was unlike anything I had ever seen. We sat at a picnic table then walked all around exploring before hitting the road again. 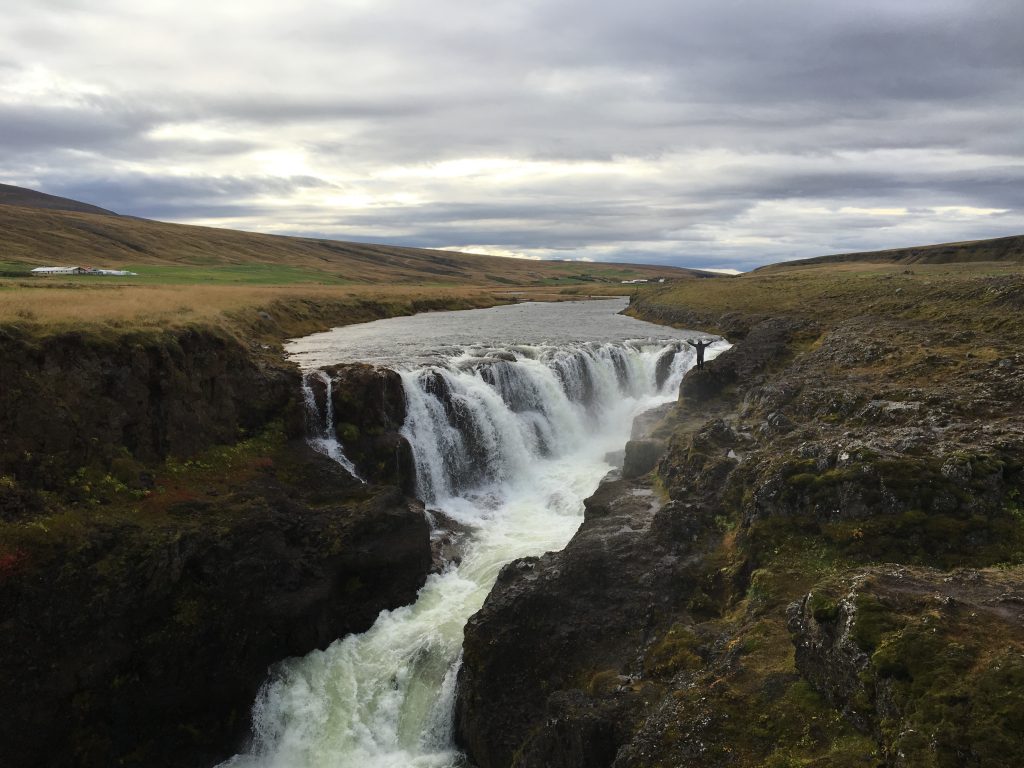 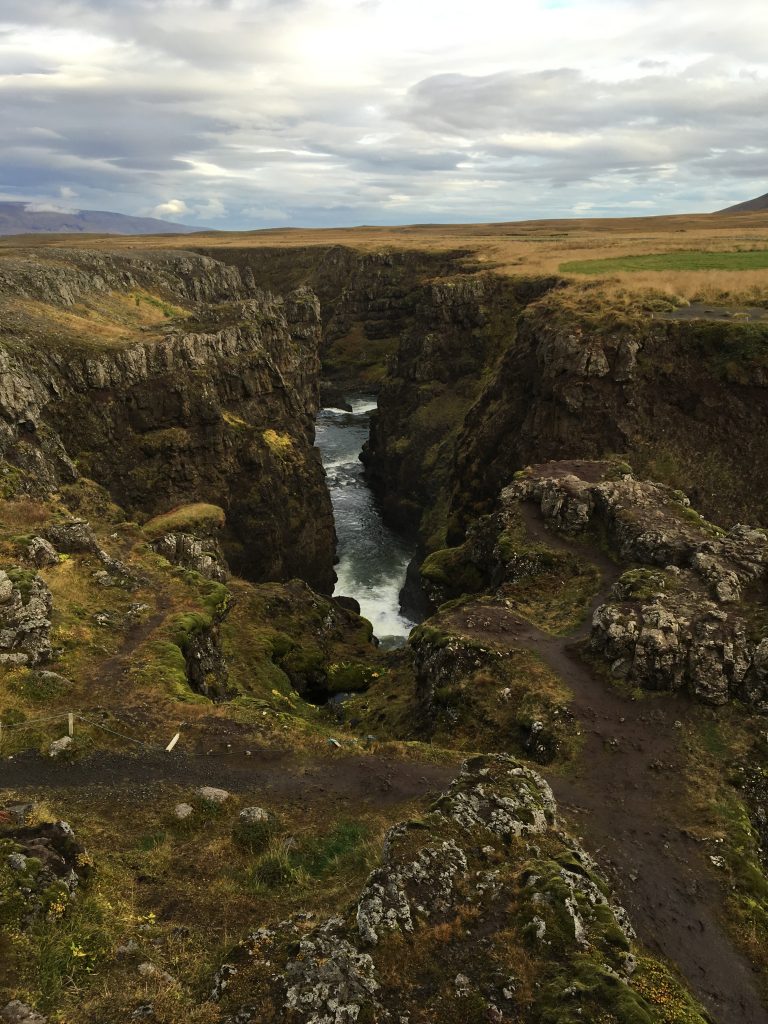 We were en route to Stykkishólmur but stumbled upon Grabrokargigar, a series of three volcano craters with a walking path around the rim of one of them. The views were pretty cool and seeing the lava field was pretty cool! 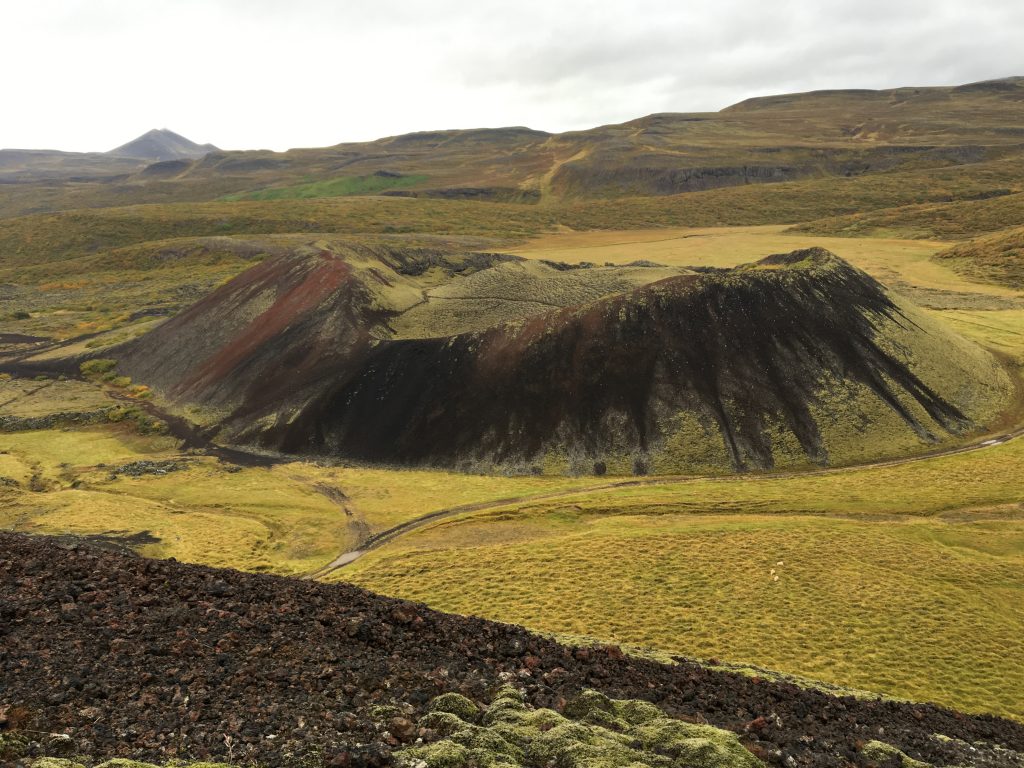 We arrived in Stykkishólmur searching for Stykkio Pizzagero, a pizza restaurant that we heard had the best pizza in Iceland. It turns out most people in Iceland don’t serve pizza until after 5 pm, so we weren’t going to be getting pizza for lunch. Instead we ended up at Nesbrauð Bakery and it was a winner. Best roast beef sandwich of my life and we tried their kleinur, an Icelandic pastry. Word on the street is that theirs is the best in Iceland. I have nothing to compare it to, but Josh and I both enjoyed them!

After continuing along the coast, we reached Kirkjufellsfoss.  Apparently this waterfall, and the mountain behind it, are the most photographed scene in Iceland. 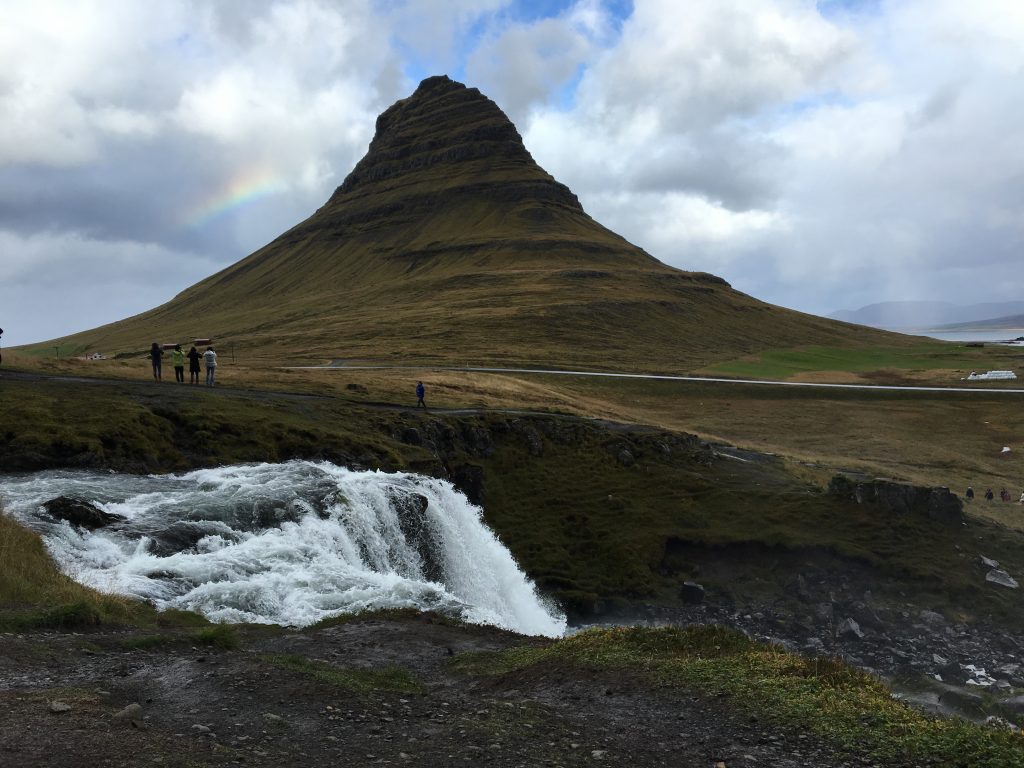 We ended up doing some more off-roading in the afternoon and drove along F-575, which brought us up into Snæfellsjökull National Park alongside Snæfellsjökull. Snæfellsjökull is a 700,000-year-old stratovolcano with a glacier covering its summit. It was pretty wild to see how fast the temperature fell as we drove along the road. After we passed the glacier, we found a couple of short hiking trails that led to small waterfalls (Snekkjufoss and Klukkufoss). It was a really cool experience to be in the middle of no where yet following trails to these secluded waterfalls. 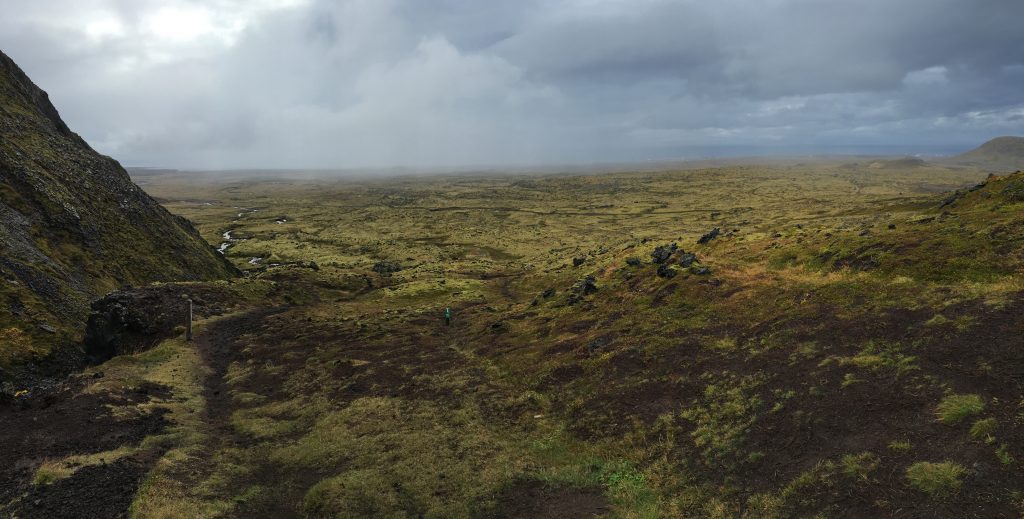 Hiking trails in the land of ice and fire

We left the national park in search of a camp site. On our way we stopped at Djúpalónssandur Beach. The entire shoreline is composed of black pebbles, not at all like the sand beaches I’m used to! 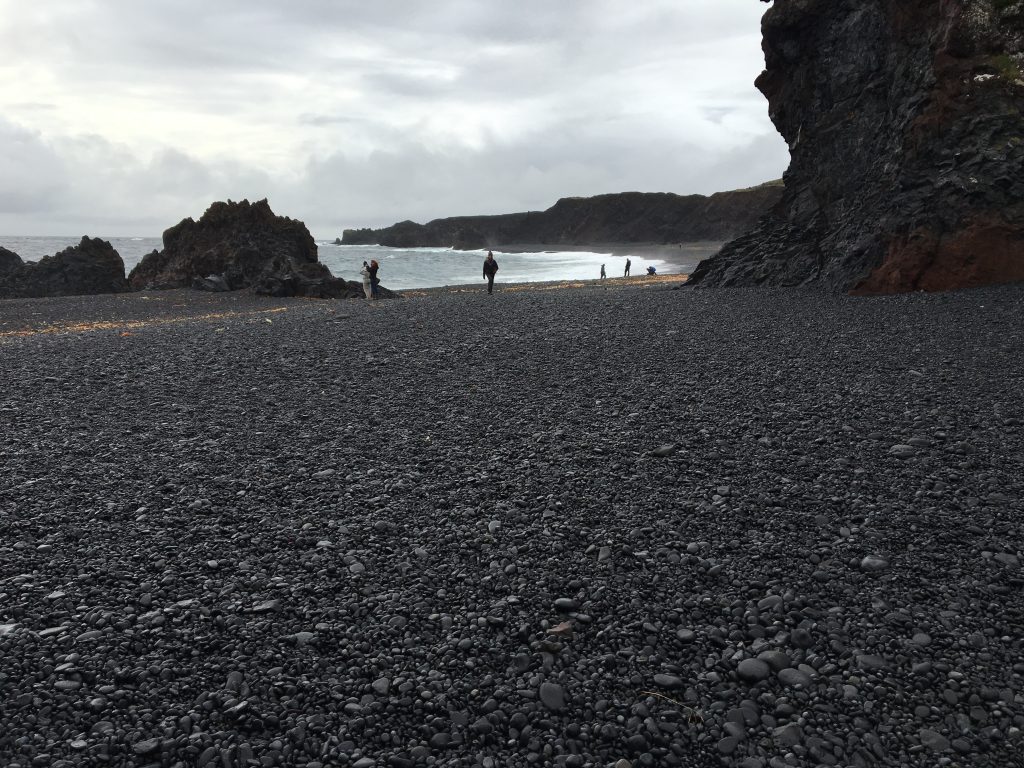 Turns out the search for a camp site in that area is pretty tough, but we ended up staying at Snorrastadir Farm Holidays, a guesthouse and camp site on a sheep/horse farm. Other than one other camper van we had the whole place to ourselves. 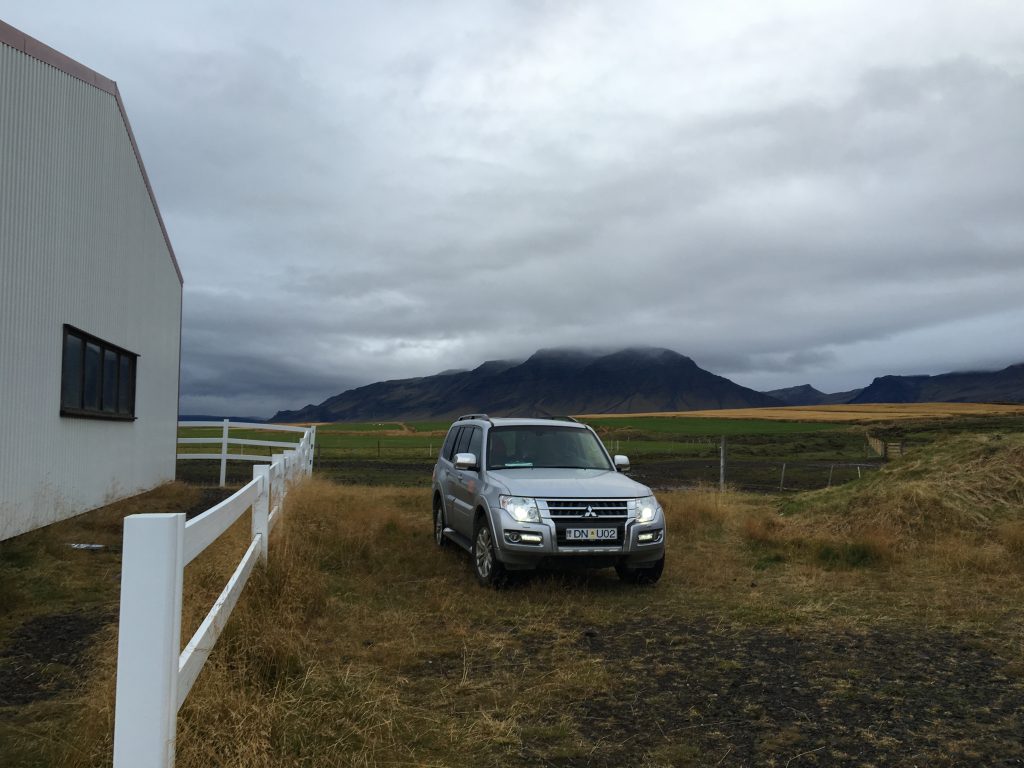 Camping at the farm

There you have the recap of days 4 to 6 of our trip to Iceland. Sorry for another long winded post but we really packed a lot into our time away! Stay tuned for details on the rest of the trip!