It seems like over the last year or so I have been seeing more and more pictures showing up in my social media streams of vacations to Iceland. It was sort of on our radar but when we saw the amazing seat sales that Icelandair had on from Halifax, Nova Scotia for early September, we jumped at the chance and figured we’d sort out the details later. Josh started looking at travel blogs and came across one that mentioned travelling around Iceland’s Ring Road using a camper van. Turns out that camping, by tent, trailer, or camper van, is a VERY popular way to vacation in Iceland. To see the highlands and travel off the beaten path, you need to have a 4×4 vehicle and one of the blogs we read mentioned that Go Campers had just what we were looking for. Josh got in touch with them and luckily, for the time that we were going to be in Iceland, they had one remaining 4×4 SUV camper. With our flight and accommodations/vehicle sorted out we knew we had the major things covered! 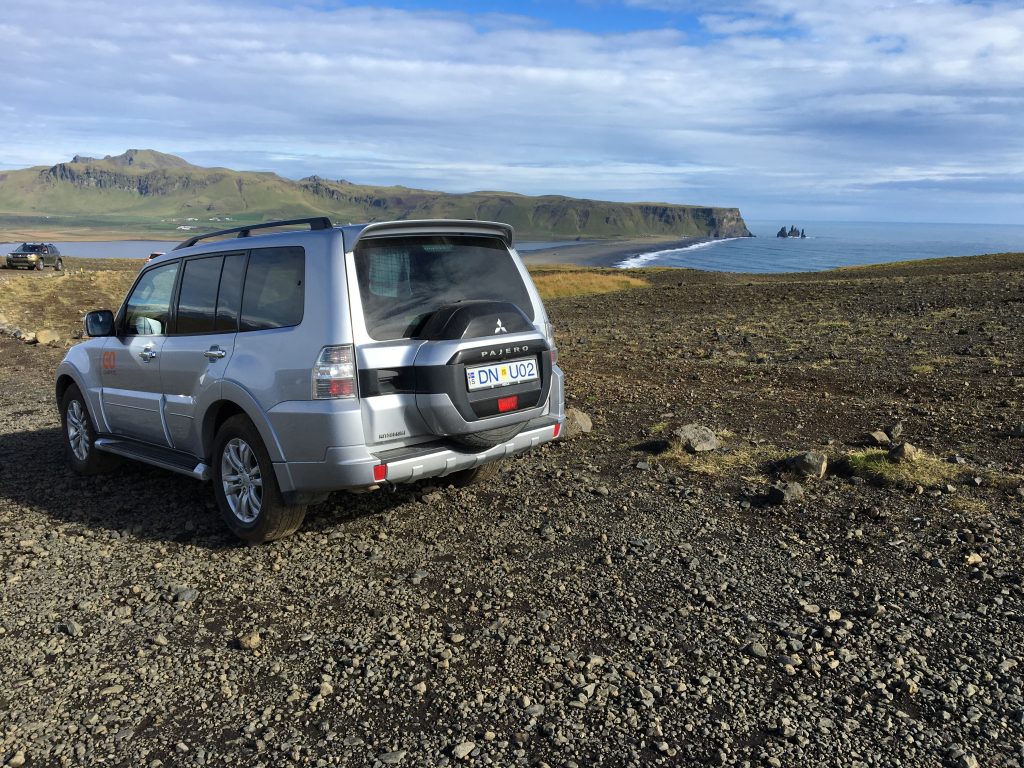 As travel time grew closer, we started checking out blogs again and making a list of things we wanted to see. We knew we had 9 days with our rental and 1 day that we could bus around before our flight left in the evening. One of the best suggestions we found was to make sure we had an unlocked cell phone with us and to buy a sim card at the airport. We ended up getting a Síminn prepaid card; 1 GB of data for 2,000 króna. It lasted 8 days before we had to top up, which was amazing since we did ALL our navigating with google maps, constantly checked out reviews on tripadvisor plus emailed home some pictures during our travels. The cards are easy to pick up at the Keflavík Airport, gas stations, grocery stores, etc.

Since we had such a jam packed schedule and traveled approximately 3,000 kilometres, I figured I’d break this recap up into three parts so I can share details and pictures from each day without writing a blog post that should really be a book! Hopefully if you ever decide to travel to Iceland, you’ll find some of the suggestions I make here useful!

We arrived at the Keflavík Airport sometime around 2 am. I can’t actually recall what time exactly since we hadn’t slept on the flight so our day was getting a little long at that point. We were waiting around until 9 am when someone from Go Campers was coming to get us. Luckily there was a juice bar that was open all night, so we tucked in at Joe and the Juice for the next few hours while ordering juice, coffee, water, and sandwiches are regular intervals to keep us in their good graces. At 9 am we hopped in our ride and headed for the Go Campers headquarters in Hafnarfjörður (approximately 10 km south of Reykjavík). The drive took about 30 minutes and we pretty quickly got our rental and took off. There was a Krónan grocery store close by the rental place so we picked up some groceries to get us through at least the first few days.

Since we had been awake for 24 hours at this point we were something akin to zombies but we powered through and started off on the northern section of the Golden Circle. At this point were following a google map we found with a 10 day self guided tour of Iceland so first stop was Þingvellir National Park. I must be honest that we could have spent more time here, walked more of the trails, read more of the information, but our sleep deprivation had the best of at this point and we were in awe of how beautiful everything was so we walked a couple kilometres and took a few pictures before setting off to find somewhere that we could possibly take a nap. 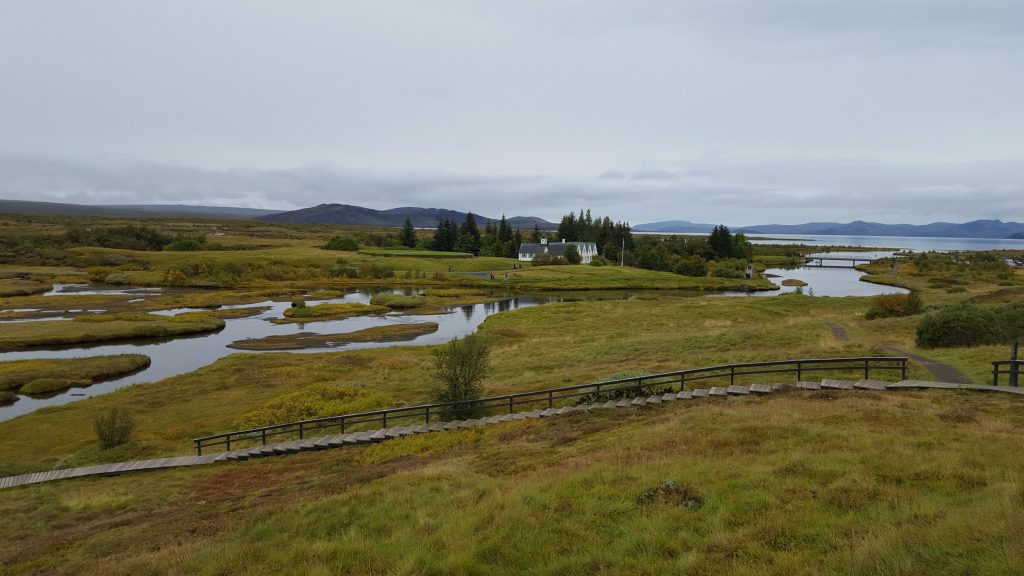 Next up we found our way to the Geysir Geothermal Field. Next to the park (or maybe part of it? I’m actually not sure!) there was a camp site. We parked in the parking lot and hopped in the back of our SUV for a nap. I don’t think we slept more than an hour but we definitely needed that short stop! Once we woke up and grabbed a snack, we hopped out and walked around the geothermal field. There are a handful of geysir hot springs in the park, but the most impressive by far was Strokkur. Every few minutes it sends a spout of water anywhere from 10 to 40 m into the air. It was amazing to watch and it was impossible not to stand there and watch it spout multiple times before wandering around the rest of the park (and of course, watching it again before we left).

To end the day we visited Gullfoss waterfall. This was our first sighting of a big waterfall and it was pretty spectacular! Since it was drizzling on and off all day the crowd wasn’t too crazy and we were able to wander around and get lots of pictures and videos! 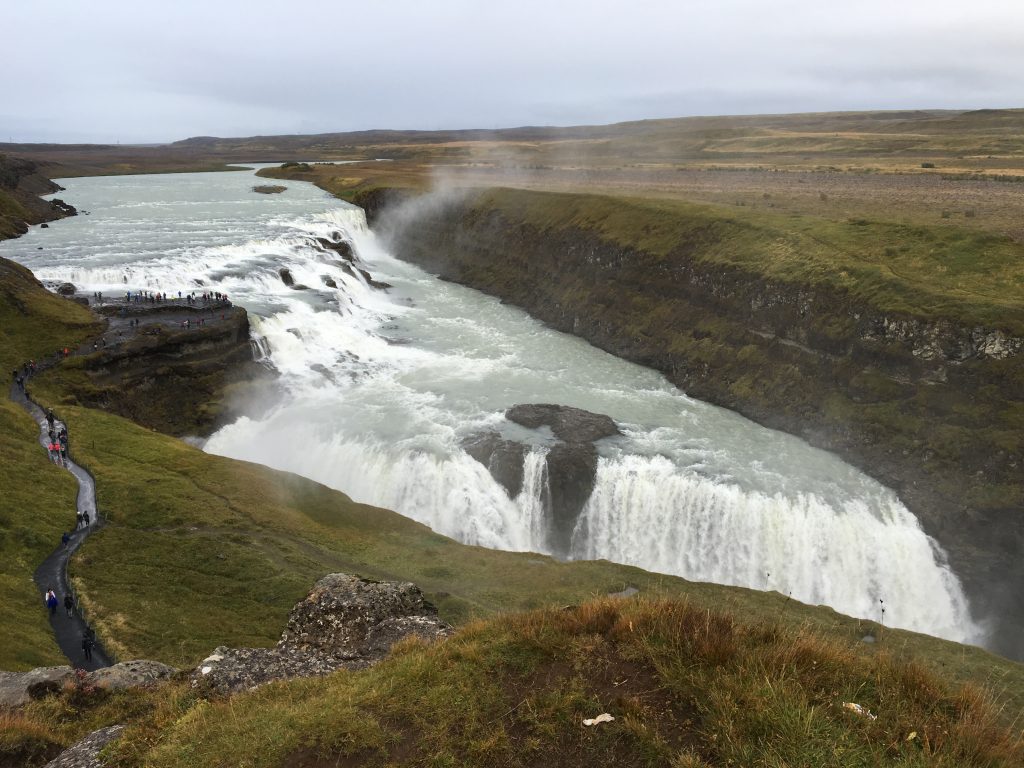 Since our plan was to travel the Ring Road, we skipped the bottom section of the Golden Circle (we did loop back and check it out at the end of the trip) and we continued along until we got to Seljalandsfoss. There was a camp site directly next to the waterfall so we rolled in there and camped for the night with the sight of a smaller neighbouring waterfall (Gljúfurárfoss) through our back window. 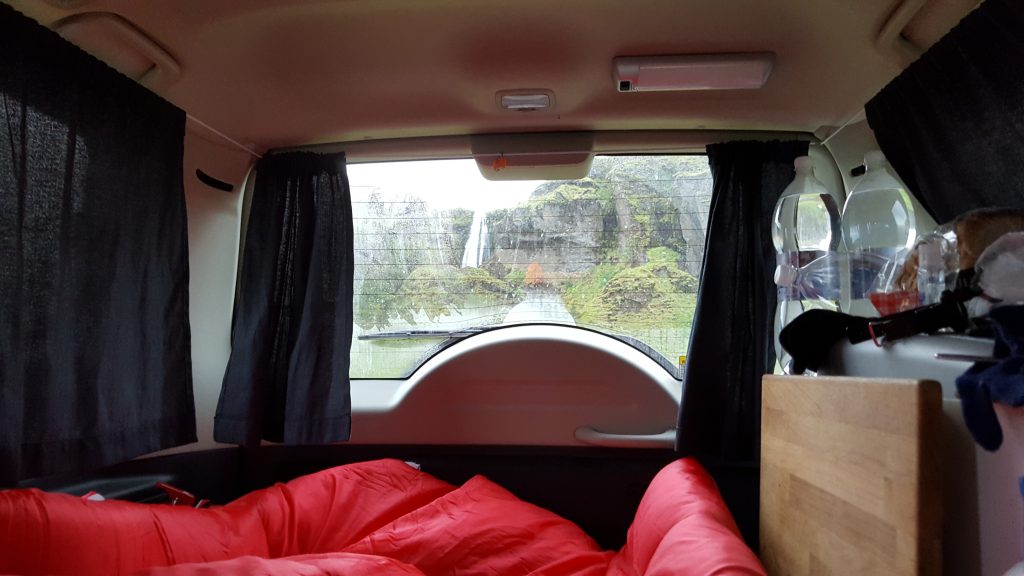 Not a bad view from bed

Day 2 started off with a great view of Gljúfurárfoss while we got ready for the day. There was a walking path between the camp site and Seljalandsfoss so we walked around and checked things out. Luckily there are so many people around the major tourist sites that we had no problem getting some shots of us with the waterfall! 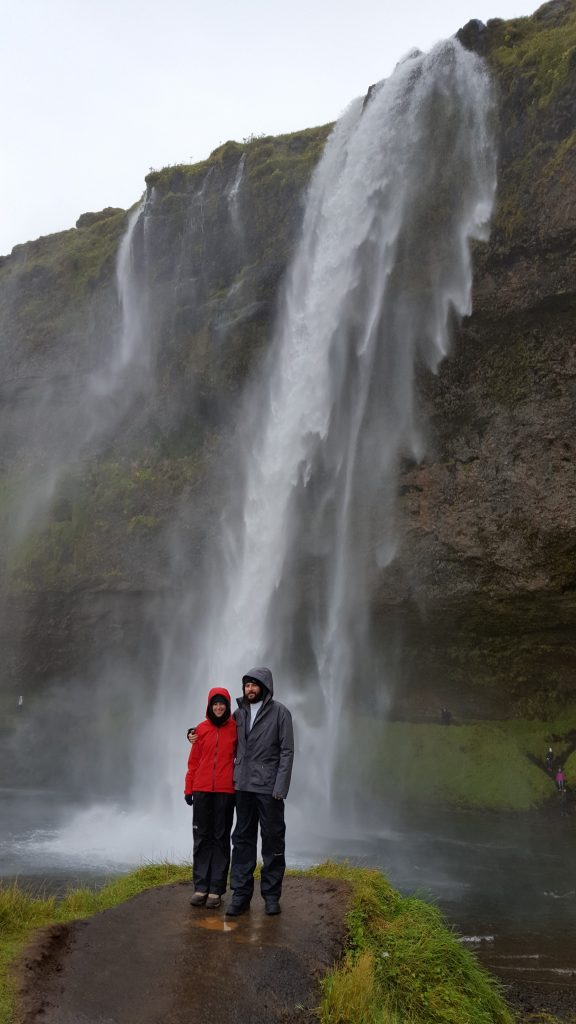 Next up on our list of waterfalls was the absolutely amazing Skógafoss. We climbed what felt like a million stairs next to the falls (I tried counting on the way down, it was actually somewhere around 400) and I am so glad that we did. There is a hiking trail that starts (or ends, depending on how you do it) at the top of the falls. Since we hadn’t done our homework and it was a full day hike, we just walked along the first kilometre to check it out and the views were astonishing. If I was ever to visit again, I would plan on doing the full hike. 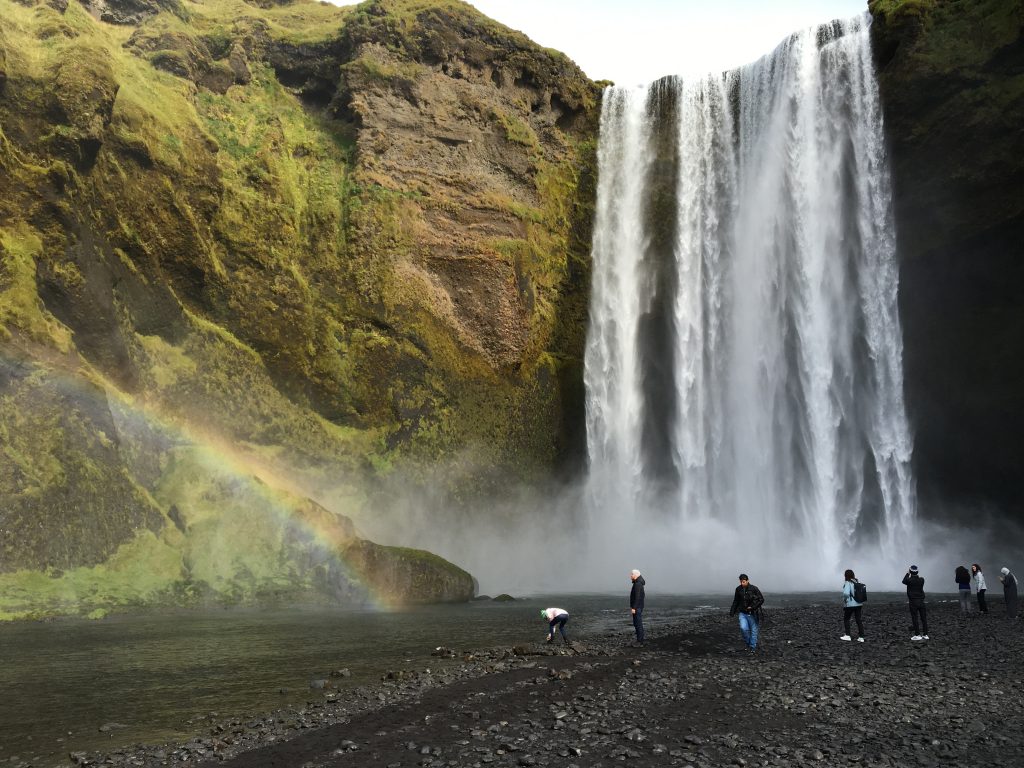 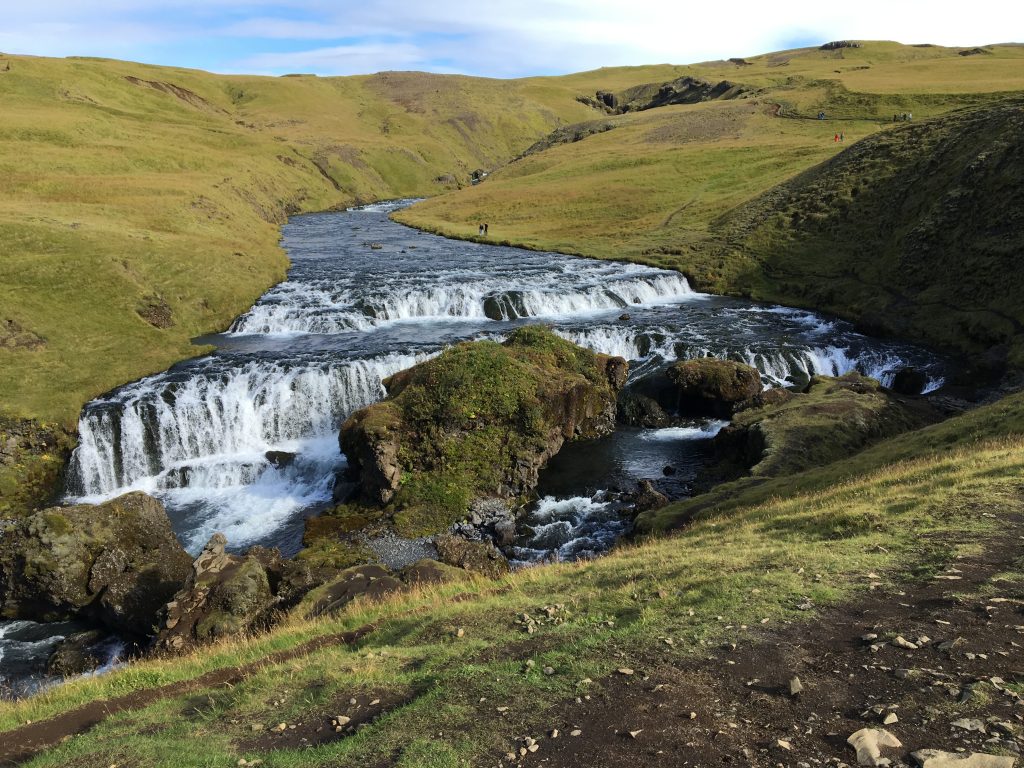 Hiking trail and falls in behind Skógafoss

After eating lunch in the parking lot at the falls we continued on the Ring Road and made a stop at the Dyrhólaey Nature Reserve. The view from the cliffs of the black sand beach was the most beautiful thing I encountered during the whole trip. Also, being a bio geek I loved seeing all the cliff nesting birds flying around. We spent a lot of time walking around some small paths and soaking in the scenery from all angles. 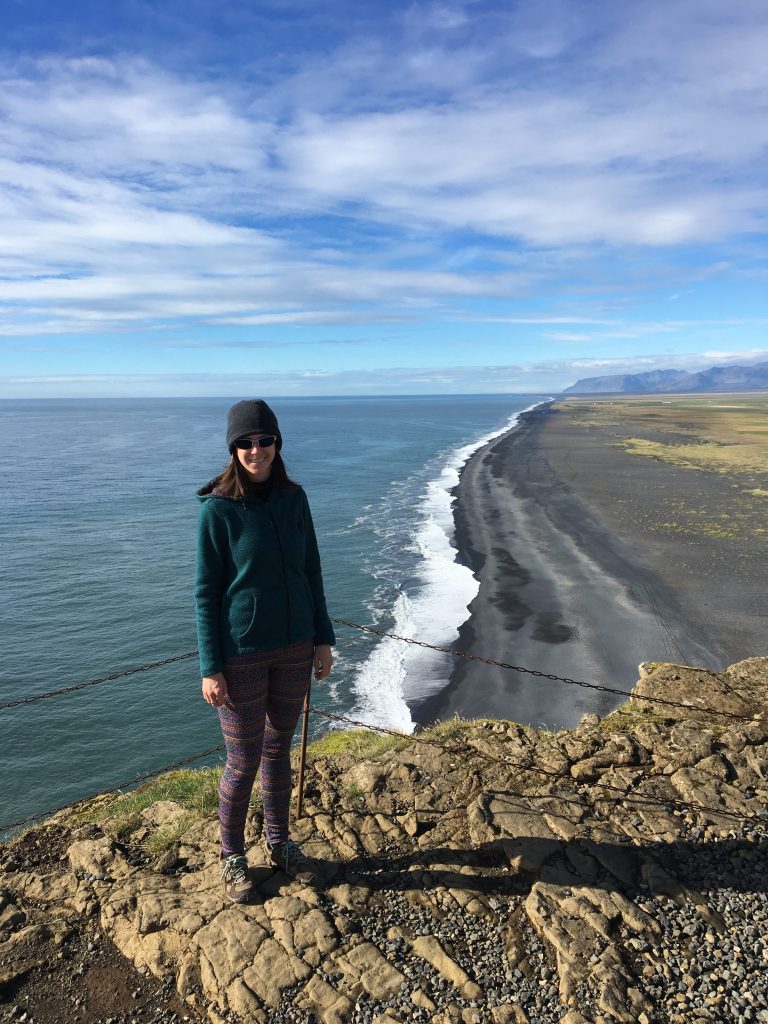 We decided to the end the day by going into the highlands. We took F-road 208 and set off for Landmannalaugar in Fjallabak Nature Reserve, known for it’s geothermal hot springs at the edge of a lava field. After a 2.5 hour drive down back roads and through rivers we ended up turning around since we knew it was at least an hour back to a camp site we had seen and it would be getting dark soon. We stayed at Hólaskjól camp site and it was one of the coolest camps we stayed at the whole trip! The camp site was closed and there was only one other group of people staying there. There were trails and a waterfall right at the camp. Unfortunately, there was no hot water in the showers and this was the day that I learned that showering in ice cold glacier water is one of the most horrifying experiences one can have while travelling in Iceland.

Day 3 started with some backtracking along F-road 208 to get back to the Ring Road. We made our way to Vatnajökull National Park to see the Svartifoss waterfall and Skaftafell glacier. The hike up to the waterfall was steep and felt WAY longer than it actually was. The waterfall was small but pretty because of the lava columns surrounding it. The highlight of the national park was the walking trail to the foot of the glacier. Getting that close to the glacier and feeling the air temperature change as we walked along the path was a pretty cool experience! 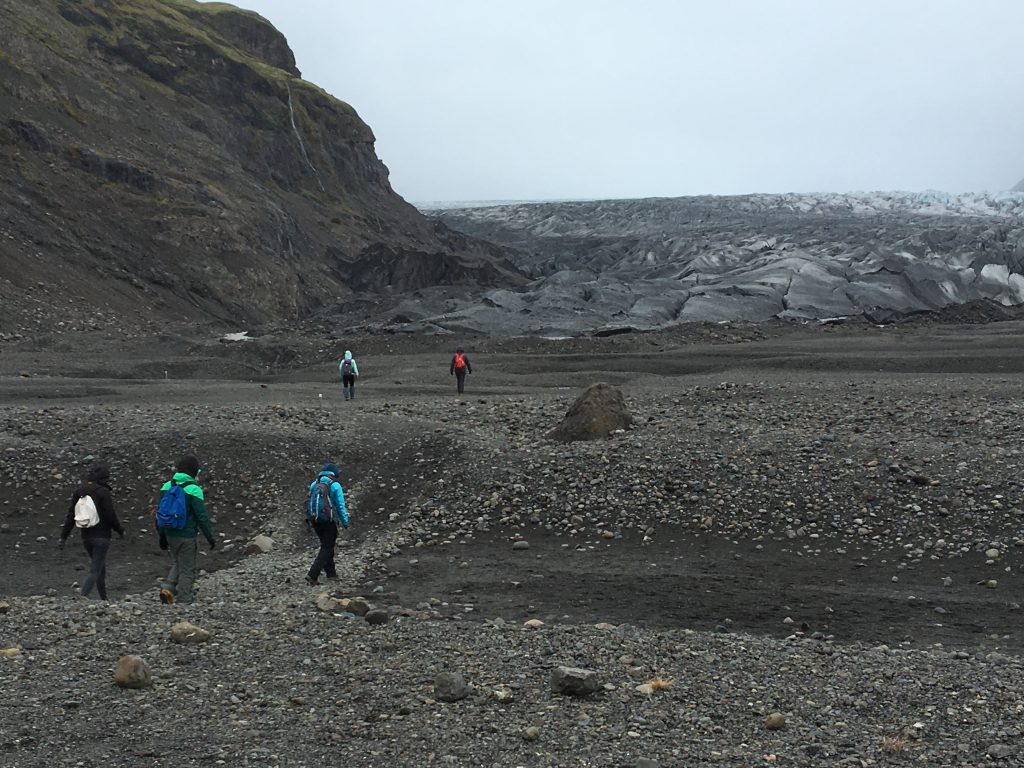 We hit the Ring Road bound for the Jökulsárlón Glacier Lagoon. We actually ended up stopping at one of the many roadside pull off areas and got a great view of the lagoon before we even knew what it was! The actual stop for the lagoon was up the road a little farther, but it was nice that we were able to see if from the other side and have the area all to ourselves (something that rarely happens when looking at the sights along the Ring Road). 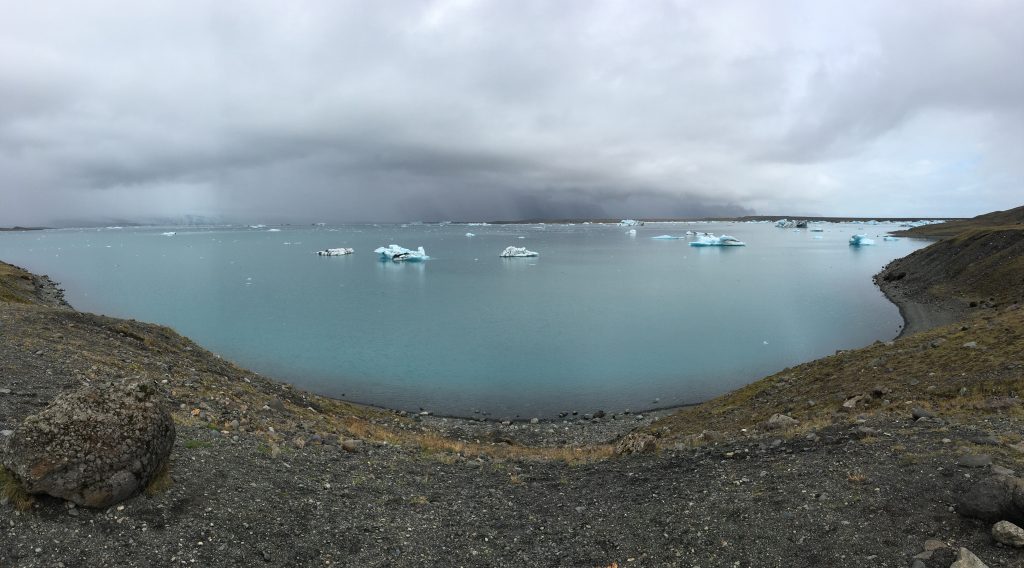 From there we made a stop at Diamond Beach. No sooner did I ask “why do they call it Diamond Beach” did the answer appear……hundreds of glacier ice fragments lined the beach and looked like a long row of giant diamonds. That in combination with the black sand beach made it a worthwhile stop, even though we weren’t there long. 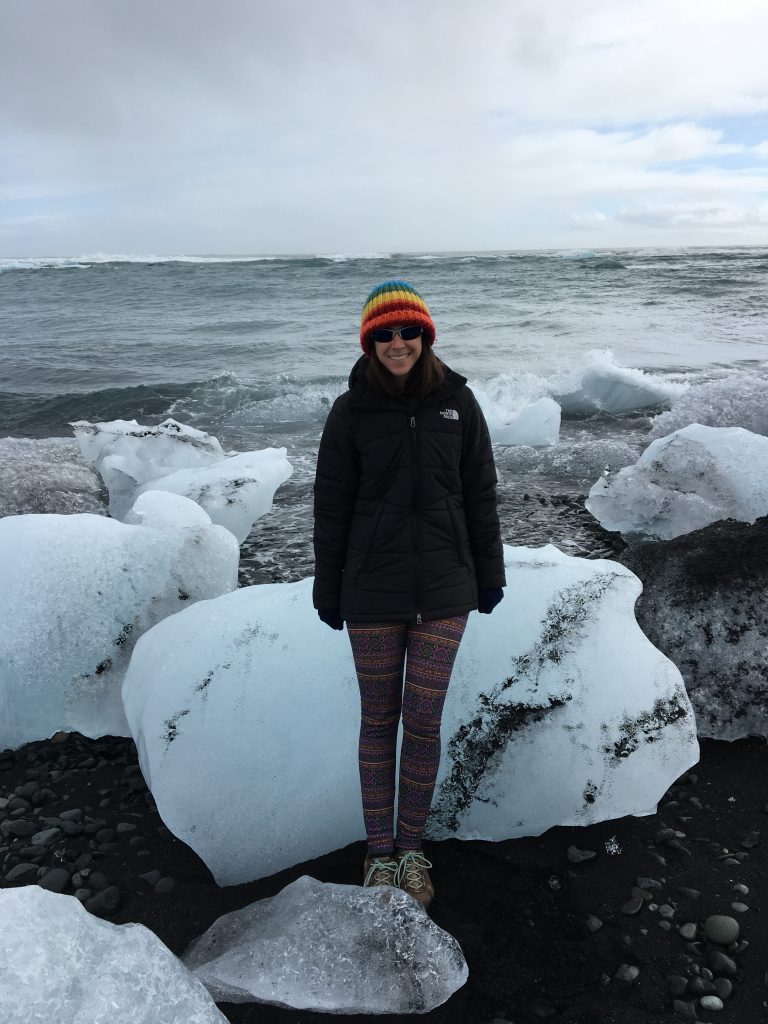 After leaving the lagoon/beach (they were across the road from each other) we headed for Höfn where we were going to stop for lunch. I checked out tripadvisor and took the great suggestion to stop at Hafnarbúðin. A small restaurant with burgers and hot dogs (known as pylsur) but also great service. The reviews said they had the best pylsur in Iceland so I decided to try it out. I’m no hot dog connoisseur but it was REALLY good and the best one I tried while on vacation. 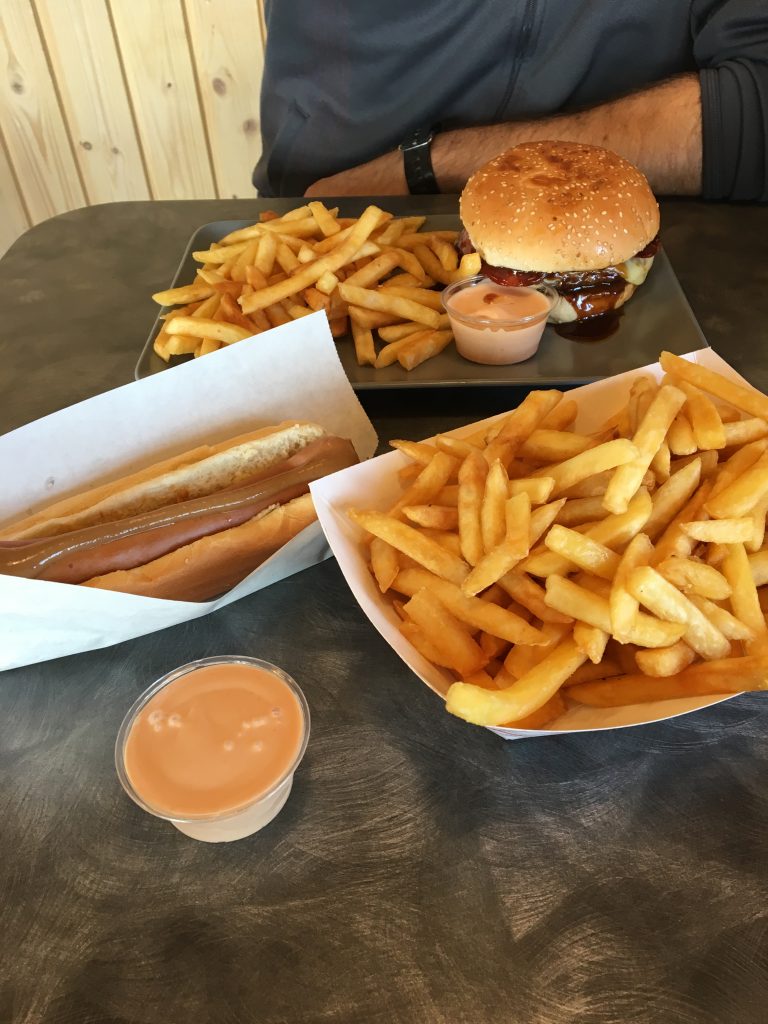 Icelandic pylsur with the works

We decided to get off the beaten path again and took a back road shortcut (route 939) to get to Egilsstaðir, where we were planning on camping. The drive was a nice change of scenery though when we got to Egilsstaðir we didn’t like the look of the camp site. After a quick tripadvisor check, we ended up moving on to Seyðisfjörður since it had a highly rated camp. When we got there we saw why, the facilities were big and looked fairly new. Unfortunately, it was also extremely crowded. Thankfully, since we typically pulled into camp around 7:30-8 every night and left by 7:30 in the morning, the crowding wasn’t much of a problem.

There you have the end of our first three days in Iceland. Sorry for the long winded post but there was so much packed into every day and I figured stretching this into three parts was the most I should do! Stay tuned for details on the rest of the trip!